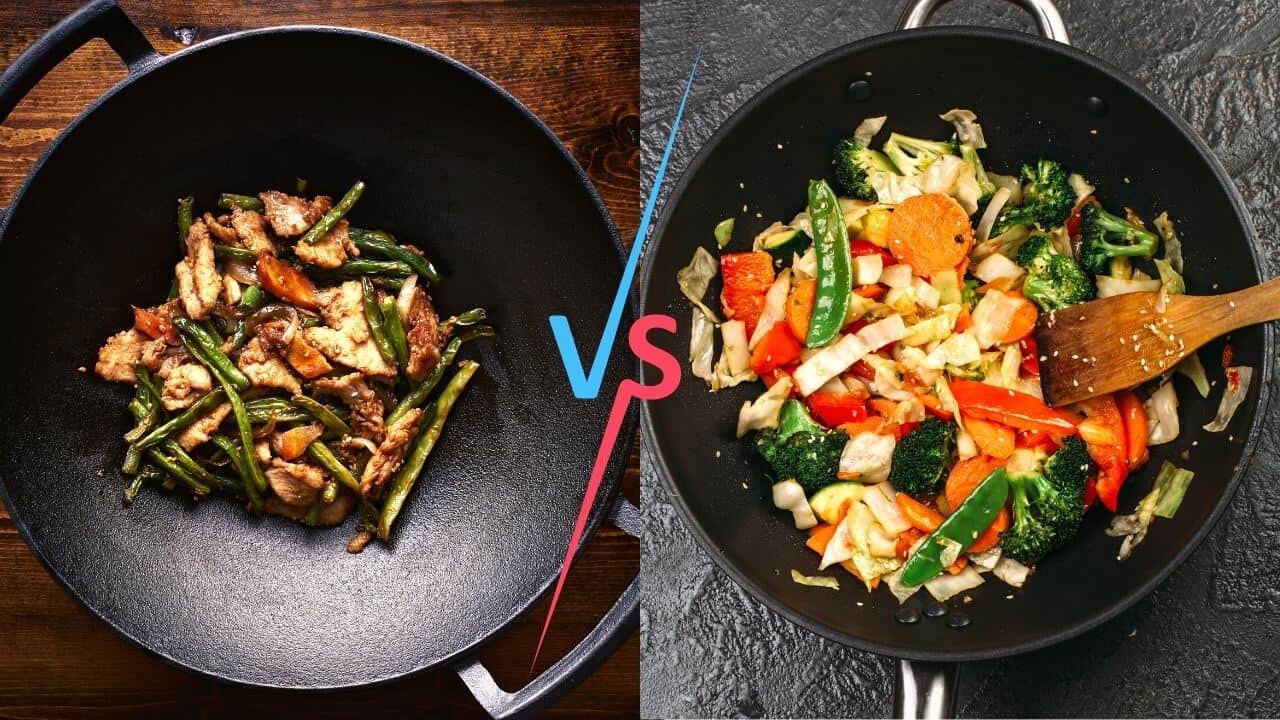 The use of woks dates back to ancient times when they were only used by the Chinese. However, their use has been revolutionized over the years and they’re now appreciated and used worldwide. The revolution introduced various types of woks, including but not limited to Cantonese and Mandarin.

Do the variations raise the questions such as how does the two types of woks compare? Which one is better than the other? What are the advantages of each type? What are the similarities and differences? What is the final choice? The two types of woks compare greatly along with various points. Keep reading this article, and you will find the answers to all your questions.

What is Cantonese Wok?

A wok is a type of cooking pan with round bottom and high wall fitted with handles on either side or a single long handle. The revolution has however led to the introduction and popularization of flat-bottomed woks as they are more efficient. A Cantonese wok is the type wok that has two small handles on either side. The Cantonese wok has a northern style which has a long handle and a small one on the opposite side. The long handle is used for stir-frying and flipping while the small handle helps with lifting. The small handle’s role in helping with lifting earns it the name “helping handle”.

What is Mandarin Wok?

Mandarin wok is the type of wok that has a single long handle with a round bottom. The handle is mostly made of wood and then inserted into steel. The wok is mainly used in cooking and flipping food, given its round bottom. For a firmer grip, the handle is sometimes made of bamboo. The wok’s great depth also adds to its suitability for making flipping food. The standard diameter of a mandarin wok is 14 inches, but it can vary to the maker’s satisfaction. The mandarin wok maintains the original signature structure of woks given its round bottom and depth.

Similarities and Differences between Cantonese Wok and Mandarin Wok

The two types of woks compare greatly with various similarities and differences making it difficult to decide which one is better than the other. However, it is possible to make the decision based on individual user needs.

A table presentation of the comparison of Cantonese and mandarin woks:

Which is better Cantonese Wok or Mandarin Wok?

Choices, they say, have consequences. Your choice of wok to buy should thus be guided by your individual user needs. Cantonese is the better choice for those in need of high food capacity, but where flipping food is concerned, mandarin carries the day. Both woks have high-performance capabilities and durability. Consequently, deciding which wok is better than the other rests squarely on individual user needs.

Which will be the final choice?

As a final verdict, the mandarin wok is the final choice. The choice is informed by the fact that despite the revolution, the wok type has maintained its originality as it is not so much affected by the flat-bottomed wok trend. Moreover, the original Chinese wok was originally for flipping, so the fact it maintains the flipping function makes it the best choice.

In conclusion, both types of woks have their respective vantage points over the other. As such, user discretion is advised when choosing a wok. Notably, the use of woks in cooking has proved to be much healthier than ordinary frying pans, given the small amount of cooking oil used. The wok’s high heat retention achieves the use of little oil. Consequently, the use of woks has been adopted across the globe.

Moreover, the original Chinese wok has undergone various innovations, such as the introduction of flat-bottomed woks. The factors discussed should thus be considered in alignment with the individual user needs when acquiring a wok.

You can read more about woks:

Nonstick Wok Vs Carbon Steel Wok: Which Is Better?

Flat Bottom Vs Round Bottom Wok: Which Is The Best?

Ornateresidence.com is owned and operated by Lawrence B. Peralta. He participates in the Amazon Services LLC Associates Program and gets commissions for purchases made through links at no extra cost to you. He also participates in affiliate programs with Impact, CJ, ShareASale, and other sites.